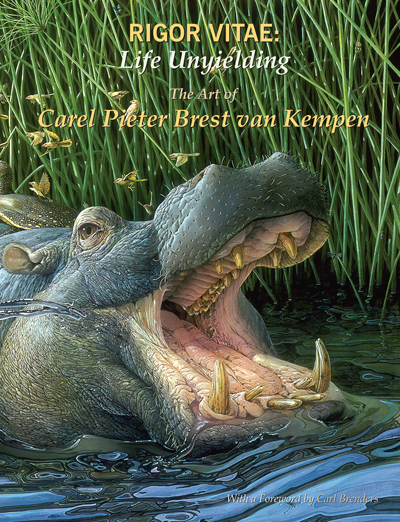 304 pages, 137 color plates, 8 ink washes, 29 drawings. A self-taught artist who honed his skills by painting for up to 100/week while living in his van, Carl Brest van Kempen has grown in stature to become one of the world's premier wildlife artists. Carel’s paintings have received wide acclaim and have been exhibited around the globe, and in the United States have received a number of prestigious awards, among them the Arts for the Parks Wildlife Award in 1992, and the “Best of Show” at the 1995 Southeastern Wildlife Art Expo and 1995 and 1998 Pacific Rim Wildlife Art Shows. In 1994, he was elected a member of the Society of Animal Artists, which awarded him their highest honor “The Award of Excellence” in 1994, 1996, 1997, 2004, and 2006. After receiving this award five times, Carel is now considered a Master Signature Member of this prestigious society. Brest van Kempen’s work can be found in the permanent collections of The Springville Art Museum in Utah, The Leigh Yawkey Woodson Art Museum in Wausau, Wisconsin, The World Center for Birds of Prey in Boise, Idaho, and the Bennington Center for the Arts in Vermont. Carel has illustrated a number of books, including Frank DeCourten’s Dinosaurs of Utah, published in 1998 by The University of Utah Press, Brian Kend’s Pythons of Australia, published in 1997 by Canyonlands Publishing Group, LC, and several books published by Eagle Mountain Publishing, LC. ORIGINAL PRICE $65.00